Having been an AvGeek since the age of six and an aviation journalist for 22 years, I have a fine sense of what every AvGeek should do before they die. Below is my list, with the caveat that not everyone will be able to do these things. But can’t we dream?

1.  Go inside a working FAA control tower. Back in November 2008, I was out at Washington Dulles International Airport for the opening of its fourth runway. As part of that visit, I got to go into the control tower with then-acting FAA Administrator Bobby Sturgell. The views were amazing!

2.  Attend one of the three major air shows. I’ve covered Singapore, Farnborough and Paris. They are busy, spread out and just amazing, from the fantastic air shows (I got to see the last Air France Concorde land at the 2003 Paris Air Show), to the crush of press conferences to visits to company chalets (I still dream about the meals I had at the Airbus press chalets).

3.  Fly in a World War II aircraft. I attended a Honeywell media event where we were flown in a Boeing B29 Superfortress, where I got to sit in the bombardier seat. Awesome!!

4.  Do a behind-the-scenes airport tour. I’ve gotten to do several, including Hartsfield-Jackson, Los Angeles International, Washington National, Washington, Dulles, McCarran International, Phoenix Sky Harbor and Salt Lake City, to name a few. Seeing the inner workings of a baggage system and hanging out on the ramp are experiences not to be missed.

5.  Sit in the jump seat on a commercial flight. Before 9/11, I got to do this several times, including: a Virgin Atlantic 747 taking off from London Heathrow; a Crossair Avro RJ landing at London City Airport; and a Continental Express Embraer ERJ-145 landing at Washington National Airport.

6.  Visit great air/aviation museums. Of course I’ve been to both Air & Space Museums in D.C. (I even got a sneak peek of the Udvar-Hazy Center on the day the Enola Gay arrived), the Swedish Air Force Museum, the Wright Brothers National Memorial, the Pima Air & Space Museum, the Palm Springs Air Museum of Flying, and the National Museum of the United States Air Force.

7.  Do a ferry flight. Ferry flights are when airlines take delivery of new aircraft and fly them back home. I’ve done several flights from San Jose dos Campos, Brazil, to the U.S. (with stops in Belem and spots in the Caribbean including Martinique) to deliver ERJ-145s and a flight from Linkoping, Sweden, to Minneapolis-St. Paul via Iceland, Greenland (cold!) and Gander to deliver a Saab 340 turboprop to Mesaba Airlines.

8.  Attend the Experimental Aircraft Association’s AirVenture in Oshkosh, Wisconsin. This, kids, is the world’s largest air show. During the week of the show, Wittman Regional Airport becomes home to the world’s busiest air traffic control tower, handling more than 10,000 aircraft. See aircraft ranging from the Boeing 787 to a spectacular display of warbirds. Check out exhibits, air shows and vendors, and meet up with a who’s who in aviation. Remind me to tell you of my encounter with Capt. Sullenberger another time…

9.  Take a general aviation discovery flight. Back in the day, one of the reporters on my staff was a pilot, and she took me up in a Piper Cherokee to see the fall foliage over Virginia, and even let me fly. If you have Living Social or Groupon in your area, they always have discovery flight deals. If not, go to your local airport and ask the flight school to do a discovery flight.

10.  Fly in a hot air balloon. When I first became an aviation journalist, I attended the fall meeting of the Regional Airline Association, in Palm Springs. Bombardier hosted a media day, and a highlight was a hot air balloon trip over the valley of the sun.

Editor’s note: kids, as my month of fun continues, my old friend Rob Mark is up next with a great guest post telling me why I need to continue my flight lessons.  Enjoy! 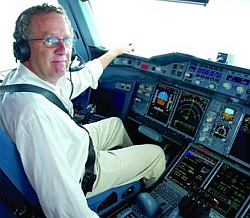 With so much talk about ladies in aviation, with the recent Women In Aviation convention and my pal Scott Spangler just penned something at Jetwhine about how women might well represent the future in aviation — it seems a fitting time to accept this offer to guest blog. The fact that I’m siting in row 21 in the back of an American MD-80 at FL 290 as I type just makes the whole idea even more fun.

Since Benet has a couple of flying lessons under her belt, I thought it might be valuable to offer up a few opinions about why she should finish her training and earn that private pilot’s license I keep hearing her talk about every time we meet.

And for you cynics out there, my suggestion has nothing to do with the fact that she’s now part of that hard-working AOPA media staff that manages to squeeze so much out of my measly $45 membership every year.

So in this time of women in aviation, I know full well that learning to fly might just offer Benet a few extra points with management and also give her a bit clearer perspective on some of the day-to-day issues that pilots face in the U.S. She could even take her daughter — the Princess of Planes — up for a little aerial adventure from time to time for sure.

Of course I also know from listening to heaven knows how many AOPA folks that almost three-quarters of the people who start flight training never finish. I took a step back and decided nope, that’s not the real reason I suggest she finish up her flight training. Benet Wilson needs to complete her flight training for a more esoteric reason not that those others drivers won’t be useful or fun.

Flying isn’t just about learning how to smoothly move the airplane’s controls or navigate from point A to point B, or successfully manage ATC on the radio. Those are aeronautical tactics.

Flying is about much more. Learning to command an airplane will make my friend think differently … much differently. Benet, you’ll become sure of yourself … OK, in your case perhaps more sure of yourself. Learning to fly teaches pilots stress management skills as they come to terms with the awesome responsibility you hold in your hands as you roll down the runway. It teaches excellent resource management skills as you balance weather with fuel with useful load all wrapped up in a new appreciation for where a budget fits into every pilot’s life.

Best of all, these tactical flying skills always spill over into a pilot’s life on the ground. You’ll become a better strategist, a better communicator. I’ve even heard learning to fly improves your love life … OK, I might have made up that last one.

“Flying alone! Nothing gives such a sense of mastery over time, over mechanism, mastery, indeed over space, time, and life itself, as this.” — Cecil Day Lewis

Rob Mark publishes Jetwhine.com, the blog of aviation buzz and bold opinion. He also
co-host the weekly Airplane Geeks radio show. A commercial pilot for “a really long
time,” he’s also CEO of CommAvia, where he and his folks deliver up leading edge media
to the aviation industry.